Welcome to Our Parish

We are a Catholic Community where Christ’s love and forgiveness is at the centre of all that we say and do.

We recognise that we are not perfect, and like any family, there will be disagreements and occasionally conflict amongst us, but we will always try to resolve our problems.

Remembering that God is never in unkindness, never in harsh words, whether written or spoken, but always in love and forgiveness.

We rejoice in the great diversity of our community and the richness that diversity brings to our Church life.  Above all we strive to make everybody welcome and seek to respond to the challenges of our Christian faith together as sisters and brothers in Christ, supporting each other in times of adversity and celebrating together in times of joy, always relying on God’s love and mercy. 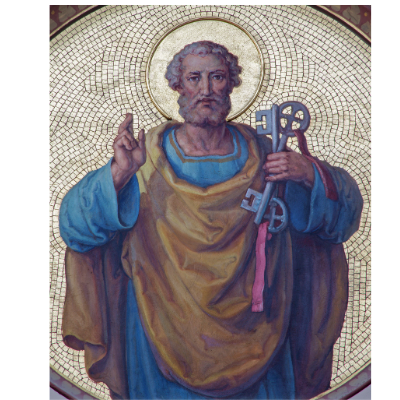 Saint Peter was Jesus’ leading disciple, traditionally regarded as the first Pope.  The synoptic Gospels indicate that Simon was the first disciple chosen by Jesus, on which occasion Jesus either gives him a new symbolic name (Cephas, or Peter. “rock” Matt 16:18) or designated him as a “fisher of men”  (Mark 1:17; see Luke 5:10). Respect and authority reside for the ancients in the first of the line of firstborn or first chosen.

Peter was a fisherman from the village Capernaum, son of Jonah (Matt 16:17) and brother of Andrew. He worked his father’s trade, possibly in a consortium with Zebedee and sons.  He was married (Mark 1:30) and apparently travelled with his wife (1 Cor 9:5).  Acts 4:13 records a public verdict that he was an “uneducated common man”.

Guardian Angels are spiritual beings who protect a person.  Pious Catholic belief assigns to each person a special angel who watches over the bodily and spiritual health of that person.  Based on affirmations in the New Testament (Matt 18:10; Acts 12:15), the belief has been widespread but never a part of Church dogma.

The Matthean text has led to a close association of guardian angels and the protection of children in both prayer and art.  There is a liturgical observance n honour of such angelic guardians on October 2 in the Roman calendar of feasts. 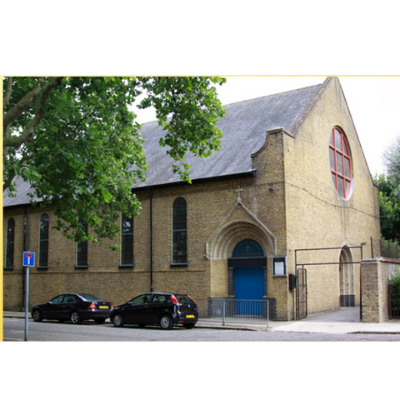 In the mid-1800s a Catholic parish church existed in Dockhead, but there was no Catholic church in the Rotherhithe area.  The East End Missions has been established to extend Catholic reach into the eastern areas of London that had no churches present and in 1858 a chapel was created in the rooms of a large house in Rotherhithe Street, whilst the adjacent Church of Immaculate Conception was built, completed in 1861. It was bombed in 1942 and not rebuilt until about 30 years ago.

The first Parish Priest of St Peter’s arrived in 1891.  Father Joseph Haynes was temporarily housed at Dockhead whilst he conducted mass in a chapel established in Paradise Street at the school of St Joseph in 1892. The Diocese purchased land adjacent to the school (now destroyed) and Father Haynes oversaw the build of St Peter and the Guardian Angels, for which funding was immediately sought.

The church was built in memory of Sir Peter le Page Renouf (1822-1897), a convert to the Catholic faith who finished his career as an Egyptologist (Curator of the Oriental Collection at the British Museum) but had previously been one of Her Majesty’s Inspectors for Schools.  In this latter role he had visited St Joseph’s school frequently, and his wife, Ludovica de Brentano, Lady Renouf, helped to fund the church due to that connection, in the memory of her husband.

The church was built in a style reminiscent of the Romanesque by architect Francis William Tasker (1848-1904) and cost £6000.00.  It is built of London stock brick with six tall round-headed windows and an inset arched and gabled entrance formed of good quality yellow stock brick and decorative white and dark grey bricks.  It has a timber roof supported on hammer beams. A large round window was set into its western end, a feature particularly favoured by Tasker and seen in other Churches built by him.

There is a choir gallery and a stone font that sits on five columns with various emblems. A small organ was added in 1922.  Between 1925-1930 Father David Leahy was responsible for adding an eastern apse with a sanctuary that contains a baldacchino Arch in Sicilian marble. The Lady Altar was also added by Father Leahy, with a stone reredos featuring the Madonna and Child, St Joseph and King David. The Church was redecorated in 2013.

The sanctuary occupies the eastern bay of the main space and a shallow apse beyond this, with a giant white marble baldacchino.  This has coffering in the underside of its arched top and Egyptian-style capitals, possible in honour of the donor (although he baldacchino was added 25 or so years later).  Tis, forward altar, ambo and retaining walls are all of Sicilian marble.  On the north side of the sanctuary is the Lady Altar with a stone Gothic reredos of Our Lady flanked by St Joseph and King David, and with marble cladding to the walls.  Nearby is plaque to the donor.

The Stations of the Cross are framed canvas paintings by Luigi Morgari (1874 -1936).

The Portrait of the Holy Family is by anon.

No bombs fell near it from either airships or planes in the First World War, but during the Second World War, when the Surrey Commercial Docks were targeted, a bouncing bomb landed on its roof.  There was no damage to the church itself but much of the surrounding area was destroyed.

Directly opposite the church in the early 20th Century were the Park Buildings, five storeys high, which opened in 1908 and were demolished in the 1970s. A little further down the road to the west was the Queen’s Head public house (which was demolished in 1973). The church now sits on the edge of King’s Stairs Gardens.

Our Parish, like the Catholic Church in England and Wales is striving towards a culture of safeguarding where all are safe from harm and abuse and where every person is encouraged and enabled to enjoy the fullness of life in Jesus Christ through the prayerful, caring, nurturing, supportive and protective endeavours of the Catholic community, both individually and collectively.
(Source: CSAS)

If you are concerned about the welfare of a child or adult at risk, do not delay in contacting the police, using 999 and also to the safeguarding office in your diocese  You can contact Catholic Safeguarding Advisory Service (CSAS) by telephoning 0207 901 1920 or via email to admin@ csas.uk.net.

The Parish Safeguarding Officer is Lisa Dalton, phone number 07826 579189 and you can write to Lisa through the contact form below. 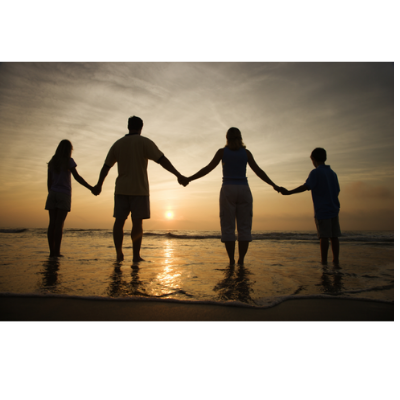 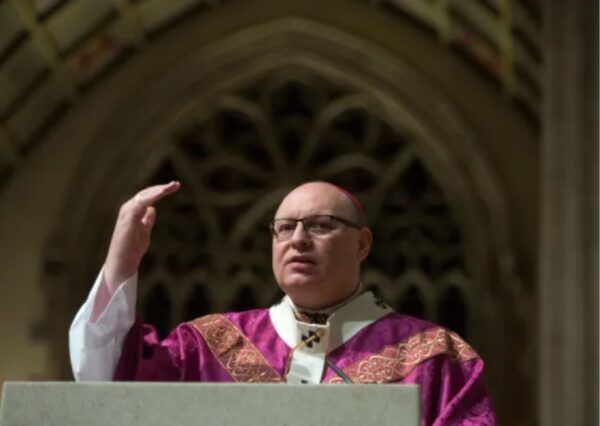 If you would like a Mass to be said with a special intention, please contact Father TesfaMichael.

If you wish to tell someone that you have arranged for a Mass to be said, you might like to purchase a Mass card at the Church Shop. There are numerous cards with beautiful images of Our Lady, Divine Mercy, Sacred Heart of Jesus and other Saints. 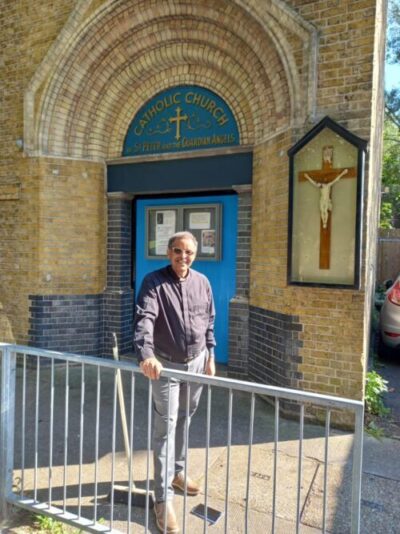 Greetings of peace to you all!

My name is Fr TesfaMichael Negusse. I am a Comboni Missionary and I am from Eritrea, Africa. I did my priestly training in Uganda and did further studies in England and Italy.  I was ordained in 1985, and as a priest and missionary I worked in Eritrea, Malawi and England.

I came to England in 2003 and worked for a few years with refugees and asylum seekers, and later appointed parish priest of Our Lady of Mount Carmel and St Joseph, Battersea, where I spent nine years. From there I was transferred to St Joseph Parish, Roehampton and spent two years, and then I was transferred to Corpus Christi Parish in Tonbridge where I ministered for the last two years.

Now I am here with you and I look forward to meeting you all, and continue our journey of faith with hope, faith and love. We are all missionaries of the Word of God, which means that we are all sent to share the Good News of our Lord Jesus Christ with our brothers and sisters through our words and actions. Let us pray for each other so that we may be instruments of love and peace to all. You can contact Father TesfaMichael HERE